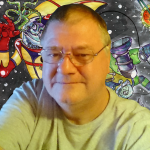 After decades of working in IT the need to find some other interest, that was not confined and curtailed by strictures laid down by other people, became a life goal; the need to reach out beyond the confining space and be able to be more creative was paramount. Don’t get me wrong, if you have the knowledge, it is possible to get very creative in IT, but you are bound by other people’s rules, you cannot create them; the programmers that create the software you use, the policy makers whose rules you have to follow, all define the boundary of the IT universe you live in, and something one does not have any true control over – all this is covered by one word; protocol. The only reason IT works, in the main, is protocol; how what does what, with what, is all laid down and written out by other people.

The Yang to this Yin is the ability to create one’s own universe, to define its rules, to make its worlds and populate it with its inhabitants. To write fiction is to achieve this goal and in 2004 this is what I set about doing.

Strangely, even fiction has its own set of rules, but they are more ethereal, open to interpretation, and ignore them at your peril, because these rules were set down before the advent of writing, when stories did not pass from one person to another via calligraphic markings on a wall, or papyrus, but when the stories were told and passed on through language on dark nights when fire was the only illumination that accompanied the enlightenment delivered by the voice.

The rules of true fiction can be understood and the best place to start is Christopher Vogler’s book “The Writer’s Journey“; an extremely readable tome, and an extremely reliable guide.

In this website you will mainly find stuff I’ve done to achieve the goal of creating universes that follow rules that are slightly skewed from the template of the real world, but in places I hope to impart ideas and encouragement because I sincerely believe writing fiction is the best game in this universe, and probably all the others if you’re a proponent of super string theory.